Theories of Universal Human Rights and the Individual’s Reality 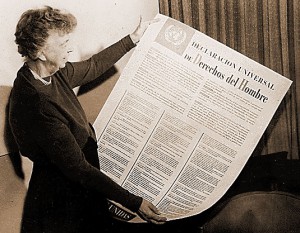 “The General Assembly proclaims this Universal Declaration of Human Rights as a common standard of achievement for all peoples and all nations, to the end that every individual and every organ of society, keeping this Declaration constantly in mind, shall strive by teaching and education to promote respect for these rights and freedoms […]”.

This statement is a part of the preamble of the Universal Declaration of Human Rights (UDHR), the most widely accepted declaration of its kind. It clearly proclaims the universality of human rights and it is taking as a given that “every individual” is aware of its universal rights and shall be willing to promote it.

This seems to be a full overview over the possible debates about the universality of human rights. But one main group – if not even the most important group – is often left aside: the people as bearer of human rights. As Christoph Menke and Arnd Pollmann put it: „Even though human rights recognize per definition all human beings as equal, not all humans equally recognize human rights.”

If the UDHR demands to be universal in the way that every individual shall promote respect for these rights and freedoms – as stated in the preamble – the nature, the understanding and the view of each individual has to be focused on much more. Only if everybody is really convinced of the universal idea of human rights, the latter will actually become universal.